Went to the Northern Territory with my father last year. No railway activities were planned, it was to be all nature and scenery. We drove the triangle, Darwin-Kakado-Katherine-Darwin, and we had a great time. We visited the museum in Katherine which had a few exhibits on the old North Australian Railway, and where I picked up a book, the "History of Railway in Katherine". It is locally produced and only cost $10 so production values weren't great, but an interesting read anyway. Next day on our way out we drove around the local relics, the station building, a massive bridge and a plinthed loco, no. 88, an NF8 class 2-6-0, formally a South Australian Railways Y class. It had been conscripted into the WW2 war effort and stayed on after.

However the bigger surprise was further up the highway. Purely by chance we made a toilet stop at Pine Creek where we chanced across this locomotive: 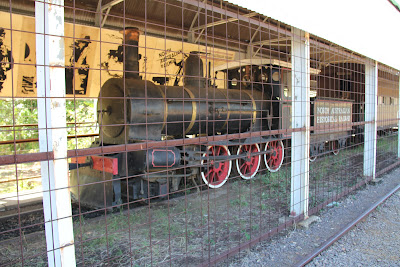 It is either NF2 or NF5, opinions differ. Either way, the NF class were originally SAR W class locomotives, and were constructed by Beyer Peacock in 1877. They were purchased for the railway by the Commonwealth Railways in 1915. Amazingly this locomotive was restored to operating condition for the bicentennial in 1988. It probably still is operational, certainly it can't be worn out from overuse. There are only the few metres of track within the Pine Creek yard to run on.

The Northern Australia Railway would make a good prototype for an operating layout if set in1944. War conditions meant there were an average of over 30 trains a day. It would also suit those interested in military modelling as most of the traffic would have been military. Certainly ten years prior there was only one train each way a fortnight.
Posted by Michael at 8:41 PM