The nA class of the Victorian Railways is one of those classic designs that just screams narrow gauge, a bit like the Darjeeling B class, the Ffestinog Fairlies, or the D&RGW C36 class. But the nA class has a profile that was so typically Baldwin narrow gauge tank from that era, one recalls to mind immediately Lyn on the Lynton and Barnstaple Railway in England, the 0-6-0 tanks on the Emu Bay Railway in Tasmania,or the 2-8-2t on the 2'6" gauge Barbados Government Railway and many others. Perhaps the closest was the New Zealand Railways Wb class 2-6-2T, which were built the same year as the first nA class and look very much like an inside framed version. So here is a photo of an nA hauling a special train for the Southern Forests Narrow Gauge Meet 2012. 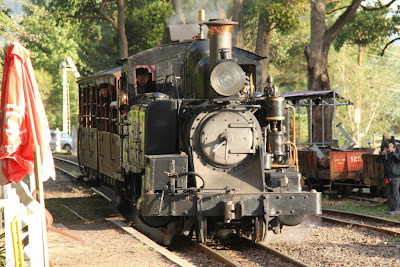 The story of the C&BFT is that it operates the line from Kongwak to Walkerville on behalf of the VR, and so has some VR narrow gauge rolling stock allocated for this purpose. So the nA class will operate on the C&BFT and I have a whitemetal kit awaiting construction. Numbers will be 3, 18 and 19. The VR seems to have kept good track of its locomotives, so we know were most were most of the time. However 3nA seems to have slipped out of sight for a few years around 1925. Also the VR started to build 18 and 19 in 1919 but stopped, so why not have those locos completed and in service on the C&BFT?

To complete this blog here is a photo of the end of the Southern Forests special train, it was not a partially long train, obviously conveying an elite group of narrow gauge enthusiasts! 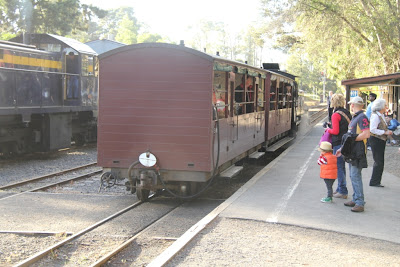