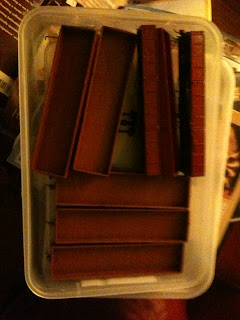 I've decided that the next modelling project will be these 8 Redfern models nQR bodies I purchased at the Southern Forests Narrow Gauge meet. The eight of them and a couple of kits and another ;Redfern model I already had will provide enough nQR's got for the CBFT. So why nQR wagons on the CBFT I here you ask? I think I will have to blog the CBFT history soon just so these things are clear.

They were cheap enough but only came with a few plastic bogies. I'm thinking about replacing them with Ian Lindsey cast metal bogies, partly because they will add weight, especially where it is needed. On the other hand the metal bogies are not cheap, enough for all 8 will cost me about 4 times the cost of the bodies.

Some already have couplers, some don't. Couplers are another issue, one I think deserves a full blog of it's own.

The nQR's were the workhorse of the Victorian Narrow Gauge rolling stock fleet. However they were limited in their capacity and smaller than they could have been. The story is the rolling stock was designed for 2' gauge, and never redesigned for the 2'6" gauge. As an example of what could have been possible consider the similar wagons supplied to the Kalka Simla Railway in India. I choose these as an example because the Kalka Simla had the same minimum radius, maximum gradient, and weight rail as the VR narrow gauge, even their 2-6-2 tanks were about the same size as the nA class.

This is the Kalka Simla wagon. It is 30ft long, 7ft wide internally and had a capacity of 19 tons.