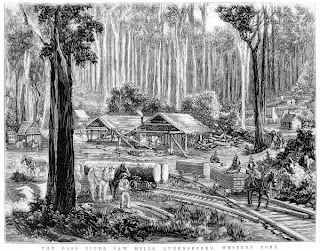 I use this etching from a 19th century newspaper as a representation of the original timber mill at Blackwood Forest, although it is actually another mill in the Bass Valley. Blackwood Forest was actually the third location of a mill that earlier was situated further down the valley. The horse-drawn timber railed tramway would have been typical however.

People travelling down the Bass Valley and Bass Hills today would be surprised by the representation of tall forests, as most of the forest was cleared, and what is present today is mostly regrowth. However the Bass Hills were the place Leadbeaters Possum was first discovered. Leadbeaters Possum looks similar to a Sugar Glider, and today is only found in the Mountain Ash forests of the upper Yarra and Marysville region. So the forests of the Bass Hills must have been similar.

People often blame sawmillers such as this for the destruction of the forests. However 19th century logging was a very selective process, only taking out the most useful trees. Broad acreage clearing was done by farmers, and they effectively pushed sawmilling out. However sawmilling in the region continued until the 1950's.
Posted by Michael at 6:18 PM